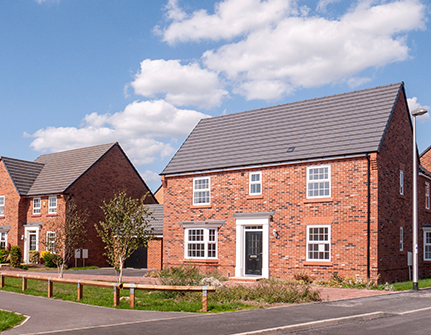 When Tim and his wife bought their shared ownership home in Newcastle-under-Lyme they were over the moon. A three-bedroom detached house with a huge garden, a garage, and only minutes away from the local hospital where Tim works as a nurse practitioner – it was their dream home!

Now, just five years later, they have managed to increase their shares on the property up to 100% - buying their house outright.

We spoke to Tim to find out more about their shared ownership experience, why they decided to increase the shares they owned on their home (known as staircasing), and about the home they live in with their two children and dog Winston.

What made you initially buy your home?

“We were renting property before we moved here. We knew we didn't want to be paying rent forever and very much wanted to be homeowners. But at that point, being a nurse, and with my wife working part-time with the children, we didn’t earn a great deal.

“When the time came to move out of the area we were in, we had a decision to make. We did look at rental properties, but we weren’t drawn to any of them. The quality wasn't particularly good, certainly not in the price bracket that we were looking at, and we really wanted to buy.

“But buying a house we could afford seemed beyond the realms of reality.

“This was when my wife suggested we look at shared ownership, being more aware of the scheme because of her line of work. I must say I was a reluctant participant to begin with…”

What doubts did you have?

“I think I had misconceptions. I understood in principle what shared ownership was. But what I didn't understand was how well it could work.

“I wrongly thought there was a level of entrapment. That you could end up in a scenario where you own part of a property, but you can't sell that part on, or that you might struggle to staircase up.

“So, I was a bit anxious as my wife pointed us in that direction, but once we started looking, well… the rest is history.”

What changed your mind about shared ownership?

“I realised that shared ownership simply makes the unaffordable affordable.

“I was still trying to get my head around shared ownership when we got in touch with Cerris Homes. It started to sound like something we might be able to do, but I had questions running through my mind. Is it our home? Is it somebody else's home that we're effectively really renting? What can we do? What can’t we do?

“Through discussion with Cerris Homes. I started to understand that actually – yes, it is ours. We can do what we want and, although there are a few limitations, it is very much our home.

“You're in a house which isn't really being looked down on by a landlord, and the rental side of it is very reasonable. It feels much different from private renting, because it feels like your own home, even before you staircase. You come in and you want to kit it out with carpets and you will paint the walls and do all the normal stuff, and you want to look after the garden – because it’s yours.”

When did you find your home?

“At first we looked at a few quite small properties. Although they were lovely, and financially affordable, we weren’t really sold on them.

“We were actually looking at a house over the road, when the person we were with pointed over here and said, ‘that house is coming up at some point’.

“This house was a totally different kettle of fish to us… it was detached, had a huge garden, a garage, a drive that could hold three cars. I mean, that's the dream! But it couldn’t possibly be a shared ownership home. We thought they'd made a mistake!

“We just knew this was the one. We had a feeling and worked hard to make sure we ended up getting it.”

When did you decide to staircase?

“We had a distinct plan from when we started the buying process of the house. We knew we wanted to staircase to 100% and we had rough timescale of when we wanted to do it, which for us was four to seven years – and we did it in five. Which was great!”

Why was staircasing important to you?

“When you think of buying your first home together, you may think ‘that's just going to be a stepping stone’, but for us this is quite likely to be our forever home. We wanted to own the whole thing outright so we could then properly make it our own.

“We initially bought a 54% share because that was the maximum we could afford in terms of mortgage. Because the rental side of things was so reasonable, it enabled us to stay on the share we had.

“We only did the one staircase. We were aware that we could go up in stages, but for us it made sense to do it this way and we were well advised. My thoughts were that, although it's a good idea and it's nice that you have the option to staircase gradually, you will have to through the solicitors each time, which is not always the cheapest thing. So, for us, one step was better.”

“So easy it was ridiculous! It takes a little bit of time, because there’s legal stuff involved, but all perfectly normal lengths of time.

“From the first phone call to completion it took three months. There was no bother in any of it - some things just naturally take a bit of time.

“We had to get a survey to get it valued, which I was happy to pay for. We then spoke to the bank to make sure that it was realistic. We knew it was as we’d used their online mortgage calculators in advance, which I would highly recommend anybody did – they tell you if you're going to be eligible.

“It was utterly painless.”

How did Cerris Homes help?

“Everybody at Cerris Homes was absolutely fantastic - very friendly, very approachable, very supportive. They told us what the process was, what we needed to do, and were always updating us from their end, so we felt very well supported from that perspective.

“We’d never felt any pressure to staircase before, but we were supported all the way through it.

“It was great – we’d lived in a house for five years and nobody had pestered us or had once said ‘you should staircase now’. But the second we said we wanted to they gave us all the information we need to make it as simple as they possibly can. They made it so simple and such a hassle-free process. We felt supported and we really appreciated it.

“Without Cerris Homes we wouldn’t live in this house and we feel very grateful for that.”

“I mean, it's funny, isn't it? It’s the most exciting thing in the world, but nothing physically changes. Me and my wife were jumping for joy and the children were just like, “What? Nothing's changed…” I don't know what they thought was going to happen!

“But what does change is the way you see your home and the way it feels to you. We’re only eight months on from that and we're about to put in a brand spanking new kitchen. We’re planning for the future, for an extension. It's the freedom to be able to do things like that.

Top tips for a stress-free move

Moving into your new home can be an exciting time, but if you don’t plan things properly it can also involve a lot of time, effort and stress. You can quickly become overwhelmed, with boxes left half unpacked and bubble wrap all over the place.

In The Spotlight: First Time Buyers

There are few more exciting times in your life than when you get the keys to your first home.     But with house prices in Cheshire having spiralled beyond the reach of many, the dream of buying your first home can sometimes feel a distant one. ...

Moving into your new home can be an exciting time, but if you don’t plan things properly it can also involve a lot of time, effort and stress. You can quickly become overwhelmed, with boxes left half unpacked and bubble wrap all over the place.